The political factors in the Titan PESTLE Analysis can be explained as follows:

Titan is a Tata product, the company owned by Ratan Tata. This Indian company has crossed made a mark by establishing itself as an in house product. The Titan umbrella is vast and encompasses many brands under it. Thus the varied products in the different segments are subject to various changing political factors. Since the time of independence, Titan has been a strong competitor in the Indian market. The segment of watches that was once dominated by the HMT, saw the rise of competitors when the various government policies were changed and paved the way to easier and better trade. The government policies related to increasing the custom duties on imported watches and clocks have given the company an opportunity to establish and promote its premium watches in this segment. This increase in duty has been served across various products that are imported, further enhancing the company's opportunity to capture the market. Titan keeps close ties with the government. This gives the company leverage to directly discuss its issues with the government representatives in case any issue arises. It ensures that the views of the industry and that of the government, regarding various aspects such as industrial relations, compliance, etc. are aligned with each other. The various trade wars around the globe have led to changes in the prices of gold and silver, thus affecting the functioning of the company. 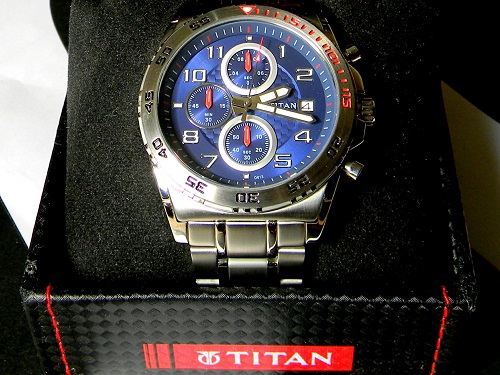 Below are the economic factors in the PESTLE Analysis of Titan:

With the trade war between China and India, the costs of various raw materials are seen to be fluctuating.

The country has seen a fall in the prices of Gold, as a result of the drop in the price of Indian rupee against the US dollar. This further affects the buying power of the consumer and leads to a reduction in the sale of the goods. The goods sold by the Titan company have a wide range. It includes classic, to regular to premium products. With an increase in buying the power of the upper-middle class, the need for premium products has increased. Similarly, with a decrease or constant increase in the buying power of people in the middle class, there is a somewhat reduction in sales. Since the middle class considers these products to be luxury, Titan needs to make sure that the consumer has a great experience with its product, and gains the value for the money he expends. Though the company operates in the premium segment, the need to have a more popular brand associated with their luxury product is embedded in the mentality of the premium segment. Thus various international brands that seem to provide more value to the consumer, affect the profit margins of the company. The growth of GDP over the next few years will determine how the company expands. The interest rates and loan repayment capacity of the consumer will determine the purchasing power of the consumer.

Titan operates across the globe, with major production taking place in India. The society has seen the company grow from classic timeless watches to multiple products in multiple segments. When the brand name of Titan is associated the products automatically are seen as reliable. The increasing cost, inflation, and reduced increments have though reduced the buying capacity, the company makes sure that all its customers are satisfied, and each one has something within his budget limits to buy. The company has evolved with the changing trends. To accommodate the youth, new brands were launched, which to date have very little competition eg. Fasttrack. To accommodate the premium customers, titan raga was introduced. To satisfy the needs of the tech-savvy and health-conscious-conscious, smart bands have been launched. The new segment of perfumes has already created its fan base. Though relatively new, the Skinn range of perfumes by Titan was launched to capture the middle class with its affordable range and quality product. The need to grow and keep its customers satisfied is the motivation that the company uses to stay ahead in the game.

The technological factors in the PESTLE Analysis of Titan are mentioned below:

Titan believes in anticipating, adapting, improvising and overcoming the various challenges. In today’s times, the trends are changing rapidly, and to keep up with the same implementation of recent and valuable technology is important for the company. How Titan manages to stay ahead in the game is all that matters. How easily can it establish a new, valuable technology is what determines if it stays the market leader or not. The company recently has launched a smartwatch for women that helps them stay connected with their loved ones and stay safe. It has a system that allows users to send SOS messages with their location. Sonata also launched ACT, an app that keeps a track of your coordinates. The company has recently launched the implementation of Schneider electrics IoT platform across its Tanishq retail stores to manage their data efficiently in energy and cost-saving manner. Titan also uses various social media platforms to promote its various campaigns, to attract the maximum audience. It also has an online presence through its websites like Caratlane.

Following are the legal factors in the Titan PESTLE Analysis:

Titan is located in India and thus has to follow the various legalities that are prevalent in its segment. There are various cases of smuggling and sale of first copies, which tarnishes the brand name. The company needs to keep a close tab on all such people who may affect not just the profitability but also the brand name. The various intellectual property laws and data protection laws established by the government, further assist the company in its smooth proceedings. Titan is also subject to various labor laws and minimum wage laws. It also must consider the various discrimination laws that protect its employees against any sort of discrimination. There are various health and safety laws that the company needs to follow. The company’s policy of ethical conduct encompasses all these laws that need to be followed.

In the Titan PESTLE Analysis, the environmental elements affecting its business are as below:

Titan believes in creating shared value for all its stakeholders and has undertaken various initiatives to satisfy the majority of the stakeholders. The company believes in improving lives, not just by creating products, but by creating a sustainable environment for the future generation. The company has introduced various clean and green technology in its operations and promotes ‘reduce, reuse, recycle’. Titan has assigned a character to their sustainability activities. It’s a cartoon character called Chutki that acts as a promoter of the company's sustainability-related actions and initiatives. They undertake various activities in the field of education, skill-building and Indian heritage and climate change. 80%-85% of the energy used in the manufacturing units in Hosur is from renewable sources. Though marginal, the company reported a 0.002% decrease in its carbon footprint for the year 2017. The company has also installed automatic tube cleaning systems and energy-efficient IE3 motors as a part of its energy-saving efforts.

In efforts towards the conservation of water, the company has undertaken a 100% recycle of trade effluence. The treated water is used in various processes like gardening and no water is released outside of the premises. With such efforts, the Titan seems to be on the right track, toward creating a sustainable environment.

To conclude, the above Titan PESTLE Analysis highlights the various elements which impact its business performance. This understanding helps to evaluate the criticality of external business factors for any brand.