The threat of new entrants in the Ford Porter Five Forces Analysis can be explained as follows:

Ford is a global giant in the automobile industry. There are a number of factors that affect the threat of new entrants in the automobile industry. The most imperative factor is the entry barrier that the industry poses. The incumbent players in the industry can control their costs due to the great impact of economies on scale on the production process. By highly optimized assembly lines and standardization of processes, the larger players are able to achieve high profitability. Doing this is difficult for a new entrant and hence the entry barrier is high. Further, the capital requirements are enormous. For setting up an automobile manufacturing company, huge amounts of capital are required for infrastructure and distribution channels, which further increases the entry barriers to new entrants. The incumbent players like Ford, Toyota etc. have a well-built brand name and long-term relationships with suppliers and distributors that help them dictate the costs to a large extent. The customers face no switching costs which works in the favor of new entrants. Overall, the entry barriers for the automobile manufacturing industry are very high, and so, the threat of new entrants is low. 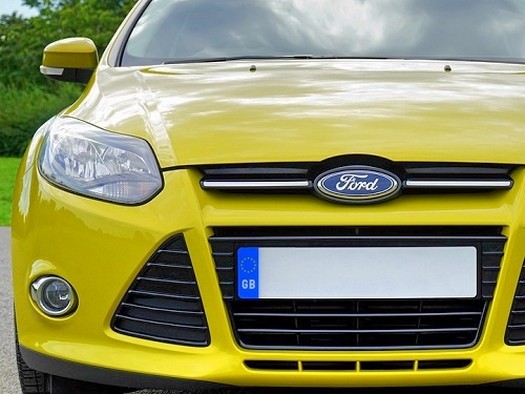 Below are the threats of substitute products of Porter’s Five Forces analysis of Ford:

There are multiple substitutes for the industry in which Ford operates.

The Ford Motor Company sells cars, trucks, and SUVs. The substitutes are public transport, bicycles, bikes etc. Further, with the rising concern towards the environment and the inclination towards use of sustainable means of transport, electric vehicles are getting popular and many companies are trying to tap this potential market. Further, the customers face no switching costs in adopting the substitutes as a means of transport. On a closer look, however, the public transports do not cater to the same target market as Ford, and hence are not a direct substitute. Further, the electric vehicles still have a long way to go in terms of setting up charging infrastructure in many countries. So, there is very little immediate threat from electric vehicles. Hence, the overall threat of substitutes for the automobile manufacturing industry can be concluded to be moderate to low.

In the Ford Porter Five Forces Analysis the bargaining power of the customers can be explained as:

Ford has offerings for various customer segments. Cars like EcoSport, Figo, Aspire etc. cater to the lower segment while cars like Endeavour, Mustang cater to the premium segment. For the middle-class segment of customers, an automobile forms a large chunk of the budget. So, for this section of customers, prices generally matter more than brand loyalty. Further, the customers face no costs if they want to switch to the product of a competitor or a substitute for that matter. Rising fuel prices also causes the customers to consider EV as a good investment instead of a petrol or diesel vehicle. Adding to this is the inclination towards greener modes of transport. All these factors provide the customers with high bargaining power. On the other hand, the products offered by Ford are differentiated in terms of their specifications and variety. They have been one of the pioneers in the automobile segment and have garnered many brands loyal customers as well. Further, the customers have no scope of backward integration which means they can not produce the products on their own by sourcing the raw materials from suppliers. All these factors lower the bargaining power of the customers.

Overall, the bargaining power of customers is a moderate to strong force for Ford.

Following is the bargaining power of suppliers in the Porter’s Five Forces analysis of Ford:

The Ford Motor Company has been in existence for over 100 years. They source their raw materials from different parts of the world. Some of the major suppliers are Flex-N-Gate, for door hinges and arms, Autoliv for airbags, U-Shin for steering columns etc. These companies are not geographically concentrated. They are located in different parts of the world like Canada, Sweden, Japan, Germany, Colombia etc. Doing this ensures that there is minimum dependence of a single supplier and prevents concentration of power in the hands of the supplier. Further, Ford incurs no switching costs in changing suppliers, except the amount spent in terminating existing contracts, if any. Also, there is very little scope of suppliers integrating forward. This means that it is not easy for them to produce the finished goods and compete with Ford in the automobile market. So, overall, the bargaining power of suppliers is a weak force as per the Porter’s model.

The impact of key competitors in the Ford Porter Five Forces Analysis is as follows:

The global automotive industry is expected to grow continuously. The market being extremely competitive with companies trying to focus on market penetration as a strategy. Ford Motor Company is one of the leading automobile manufacturers in the world. It generated a revenue of more than $120 billion USD globally in a year, selling more 60 million cars. It commands a decent global market share and faces competition from companies like Toyota, Volkswagen, Honda, Hyundai, Chevrolet, General Motors etc. Further, the automobile industry is highly capital-intensive, with large upfront investments requirements for infrastructure and distribution channels. As a result, there is high exit barrier for any unsuccessful players to exit the market. The customers face no switching costs in shifting to a competitor.

So, the competitive rivalry is a strong force for Ford.

To conclude, the above Ford Porter Five Forces Analysis highlights the various elements which impact its competitive environment. This understanding helps to evaluate the various external business factors for any company.