The threat of new entrants in the John Deere Porter Five Forces Analysis can be explained as follows:

John Deere is a leading manufacturing form for machinery used in agriculture and construction activities. In this industry, it is imperative to understand the entry barriers posed to analyze the threat of new entrants. The machinery produced by John Deere and competitors are heavy and the capital requirements for setting up the infrastructure is high. There are large land requirements, sophisticated equipment needed, and skilled labor required to operate the machinery. Further, the transportation costs are high. These factors pose high entry barriers to a new entrant. Additionally, due to the high fixed costs, the incumbents enjoy major cost advantages by mass-producing due to economies of scale. The incumbents also enjoy an established brand name and well-established distribution channels. All these factors make it very difficult for a new entrant. The customers, however, face no switching costs in trying the products of a competitor. Overall, the threat of new entrants is a weak force in the industry that John Deere operates. 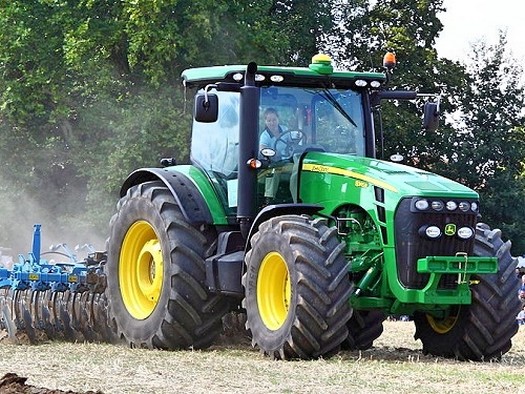 Below are the threats of substitute products of Porter’s Five Forces analysis of John Deere:

There are little to no substitutes for the products offered by the industry. There are hand tools available for farming but there is a huge difference in performance. For large farms and construction sites, using manual tools is highly impractical and hence, they cannot be considered a true substitute. Even though the substitutes are much cheaper, customer would prefer sticking with the offerings of the industry. Hence, the threat of substitutes is a very weak force in the industry that John Deere operates.

In the John Deere Porter Five Forces Analysis the bargaining power of the customers can be explained as:

The heavy machinery and equipment produced by John Deere and others in the industry are highly differentiated and specialized as per the requirements of the target customers. The customers cannot integrate backward i.e., they cannot produce these products by themselves. These are the factors that lower the bargaining power of the customers. However, the products are expensive and forms a large chunk of the budget of the customers. The target customers can range from large construction firms to small non-commercial farmers and so, the price sensitivity is highly relative. For the lower end of the target segment, price sensitivity can be high. They could easily switch to the offerings of a competitor since they face no switching costs. As a result of this, the brand loyalty is low.

Overall, the bargaining power of customers is a moderate to strong force in the farming and construction equipment industry.

Following is the bargaining power of suppliers in the Porter’s Five Forces analysis of John Deere:

John Deere sources its raw materials from a wide network of suppliers. The company maintains its own portal where current and prospect suppliers can sign up to associate with the company. The suppliers are readily available and not concentrated geographically. The products offered by the suppliers are largely undifferentiated. As a result, the company does not face any major costs in terminating the contracts and switching to a different supplier. Further, with an annual sale of $8 billion USD globally, John Deere is an important client for a supplier and largely dictates the terms of the contract. Furthermore, the suppliers cannot forward integrate because of the intensive capital requirements of the industry. Overall, the bargaining power of the suppliers is a very weak force and not a cause of concern for John Deere and its competitors.

The impact of key competitors in the John Deere Porter Five Forces Analysis is as follows:

John Deere has a few but large competitors in the construction and farming machinery industry. The competitors include Caterpillar, Komatsu, XCMG, Sany etc. The industry is a niche market and hence the target market is small. The market is growing at a steady pace, and hence offers a market potential for companies like John Deere to grow further. Hence, the companies focus primarily on market penetration and capturing market share. There are high exit barriers in the industry because of costs of shutting down and paying off debts and so, less profitable companies also are forced to stay and eat into the profitability of the key players in the segment. The consumers are rarely brand loyal because of a major chunk of them are small-scale farmers with a limited budget. They can easily switch to the offerings of a competitor if the prices rise.

Overall, the competitive rivalry is a moderate to weak force in the construction and farming machinery industry with no immediate threat.

To conclude, the above John Deere Porter Five Forces Analysis highlights the various elements which impact its competitive environment. This understanding helps to evaluate the various external business factors for any company.