The threat of new entrants in the Subway Porter Five Forces Analysis can be explained as follows:

Subway is one the largest fast-food chains having a wide global reach. Considering the industry’s high capital needs, new entrants find it extremely difficult to bring in large investments as required. This high capital investment is the result of research and development expenditures mainly. Apart from this, government has special rules regarding licensing and regulations and the processes followed for those, which comes as another setback for them. Well established companies like Subway already produce goods in huge quantities which gives them a significant cost advantage. Hence for the new entrants, economies of scale is very difficult to attain. This in turn also leads to high costs of promotions for the newer companies looking to get into this industry. Different firms sell different products which the customers also prefer. Hence there is a strong focus on advertising and good customer services which is mainly possible due to good network and financial condition, thus again making it hard for the newer entrants to enter. 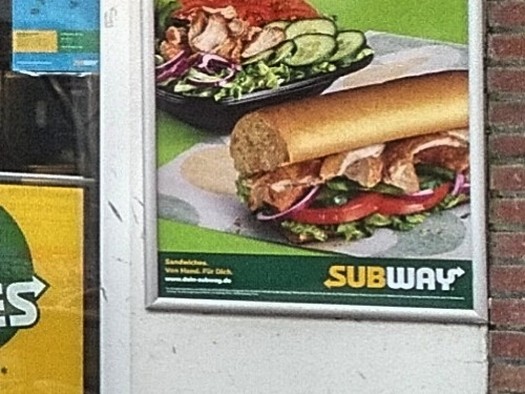 Below are the threats of substitute products of Porter’s Five Forces analysis of Subway:

For the product range in which Subway operates, there are not a lot of companies.

Hence there is not a lot of substitutes. For the substitutes that are available, they are produced by the low profit earning industries. These few substitutes might be of inferior quality but they charge a premium and hence are way more expensive. Firms which produce inside the same industry, operate at a lower price than Subway, but with adequate quality. This implies that there are not a lot of customers who are willing to switch to substitute products. By providing even greater quality in its products, Subway can make sure the customers go nowhere else. It can also think of differentiating its products, just to let the customers know that the product they offer is unique and cannot be replicated easily.

In the Subway Porter Five Forces Analysis the bargaining power of the customers can be explained as:

As a result, purchasers' negotiating power is weakened inside the sector.

Following is the bargaining power of suppliers in the Porter’s Five Forces analysis of Subway:

In the market in which Subway works, there are often more providers than buyers. This implies that suppliers have less pricing control. These vendors' products are generally standardized, have little differentiation, and have minimal switching costs. This makes switching suppliers simpler for buyers like Subway. Not all providers compete with each other over items in this kind of business. This implies that other alternative options are not present for the product than the vendors. The suppliers do not provide a real threat to Subway's forward integration into the sector. Subway is a significant consumer for its suppliers because of the business in which it works. This means that the profitability of the sector are inextricably linked to those of the suppliers. As a result, these vendors must offer competitive prices. As a result, suppliers' negotiating leverage inside the sector is weakened.

The impact of key competitors in the Subway Porter Five Forces Analysis is as follows:

In the area in which Subway works, there are extremely few rivals. The majority of these are also rather enormous. Some of the main competitors are McDonald’s, KFC, Burger King, Starbucks etc. This implies that no action by a company in the business will go undetected. Only a few rivals have a significant market share. Hence, competitive advantage can only be achieved by really competing hard in order to become market leaders. Subway's goods are significantly differentiated within the sector in which it works. As a result, rival enterprises find it difficult to gain clients from one other because each of their items is unique. Due to the large capital and asset investment necessary to operate, the industry's departure barriers are exceptionally high. The manufacture of items within the sector necessitates a significant expansion in capacity. As a result, the sector is vulnerable to supply-demand imbalances, which frequently result in overproduction. Overproduction necessitates price reductions in order for a company's items to sell.

As a result, existing corporate competition becomes a greater force inside the industry.

To conclude, the above Subway Porter Five Forces Analysis highlights the various elements which impact its competitive environment. This understanding helps to evaluate the various external business factors for any company.