The threat of new entrants in the IBM Porter Five Forces Analysis can be explained as follows:

IBM was established in 1911 in New York, United States. For this analysis, we will be focusing on the key businesses of IBM including Cloud and cognitive software and Global Technology Services. The company is a multinational technology corporation. Its major businesses include technology support services, cloud services and enterprise business solutions. The most profitable business is the hybrid cloud solution under the IBM Cloud business. The economies of scale is a key factor in the hardware business where the company is able to reduce the costs due to standardization of processes and sophisticated infrastructure setup. It is largely a B2B provider and the primary customers are large firms with cloud storage and enterprise server requirements. The customer can not switch to a competitor easily since it would require a lot of time and effort in revamping the infrastructure with the risk of incurring data losses. The capital requirements for setting such a business are huge. There is large fixed cost for setting up cloud storage hardware and manufacturing facilities for servers. The incumbent players also have an advantage of an established brand name which would provide significant entry barrier in acquiring new customers. Overall, the threat of new entrants is a weak force in the industry in which IBM operates. 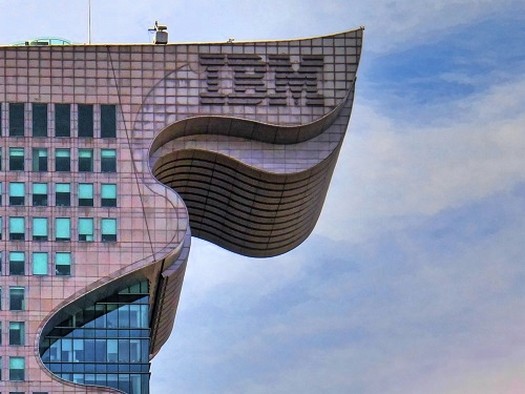 Below are the threats of substitute products of Porter’s Five Forces analysis of IBM:

For the enterprise server solutions, the cloud services itself can be an important substitute.

This means that IBM’s cloud offerings would be threatening the revenue of its other hardware business. As a result, the company has gradually shifted focus from the hardware and legacy systems and moved to the cloud and AI services. Due to the ease of business offered by cloud service providers, many companies are shifting to cloud storage solutions. Thus, even though the number of substitutes is limited, the value proposition is lucrative enough for customers to switch. Further, even though the customers would need to incur expenses to switch, in the long run they would save by reducing expenditure on in-house maintenance of hardware. So, the threat of substitutes is a strong force for the hardware sector of IBM’s offerings. For the other offerings, however, there are no major substitutes, and it is a weak force.

In the IBM Porter Five Forces Analysis the bargaining power of the customers can be explained as:

The bargaining power of customers depends on many factors like the size of each purchase, the budget of customers and the degree of product differentiation. For all of IBM’s businesses, the customers are big companies with technology support and cloud service requirements. The products offered by the company are customized and catered to the needs of the customer. The company invests a lot of money in research and development worldwide to ensure differentiation of its offerings. For instance, IBM spent roughly $6 billion dollars worldwide in research and development in 2020. However, the customers are less in number and the volume of sales per customer is large. Further, the company also provides after-sales support and maintenance services which means that it becomes all the more imperative for companies to maintain relationships with customers to reduce churn.

Overall, the bargaining power of customers is a moderate to strong force in the cloud, hardware and software industry.

Following is the bargaining power of suppliers in the Porter’s Five Forces analysis of IBM:

The bargaining power of suppliers largely depends on their concentration and their ability to forward integrate. IBM has over 14000 suppliers spread across 100 countries in the world. This indicates that the volume of suppliers is extremely high, and they are highly diversified. Some of the key suppliers for the company are Fujifilm, Intel, Toshiba, Lenovo, Mitsubishi etc. Their bargaining power would vary based on the nature of the product offered. For instance, suppliers offering less differentiated products, like packaging materials, would have less bargaining power than companies like Intel, which offers processers on which the servers operate. Similarly, the switching costs would also depend on the nature of the product. Hence, overall the bargaining power of suppliers is a moderate to strong force in the industries in which IBM operates.

The impact of key competitors in the IBM Porter Five Forces Analysis is as follows:

With the advancements in technology, the IT industry is getting highly competitive. There is intense rivalry in all the businesses of IBM. The major competitors for the IT and cloud services of IBM are Accenture, TCS and Infosys. For the cloud services, the major competitors are AWS, Google cloud, Microsoft Azure etc. The major competitors in the software segment are Microsoft, Oracle, SAP etc. The major cause of the competition is the boom in the IT industry causing IT companies to expand operations and outsource services. As a result, companies like IBM are scrambling to gain market share. Further, the industry poses high exit barriers. There is a lot of effort required to wind-up infrastructure and terminate ongoing contracts. As a result, less profitable companies also stay in the market negatively affecting the market share of the key players.

Hence, it can be concluded that the threat of competition is a strong force for IBM in its key businesses.

To conclude, the above IBM Porter Five Forces Analysis highlights the various elements which impact its competitive environment. This understanding helps to evaluate the various external business factors for any company.