Let us start the Toys R Us PESTLE Analysis:

The political factors in the Toys R Us PESTLE Analysis can be explained as follows:

Toys R Us has been titled as the leading specialty retailer of toys and baby products on a global basis. The company has successfully established its operations through 1691 stores and have further obtained licenses of 250+ stores which are located in more than 38 countries. The brand name of Toys R Us is highly recognized across North America, Europe and Asia. The company is a market leader in the toy and baby products retail space. They focus upon substantial scale, reducing geographic footprint and maintain strong vendor relationship in order to establish a market leading position and distinguish themselves from the competitors. Due to high growth potential of the Chinese market, the company opened their first licensed store in China by establishing a partnership with China. In 2011, Toys R Us acquired a high ownership percentage of 70% in Toys Holding Limited from Fund Retailing, which included locations in Brunei, China, Malaysia, Hong Kong, Thailand, Taiwan and Singapore. The company’s international segment portfolio has been growing continuously at a rate of more than 22%. 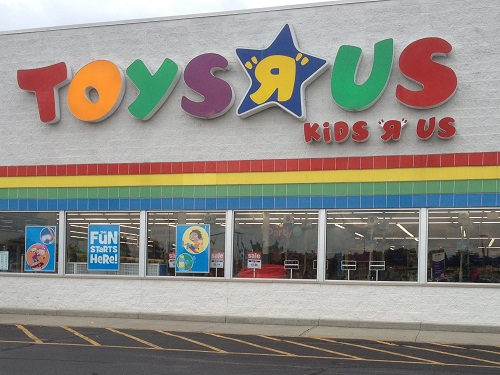 Below are the economic factors in the PESTLE Analysis of Toys R Us:

Toys R Us has a wide range of product portfolio which acts a direct contributor to the sales, earnings and cash flows of the firm.

The Chief Operating Decision Maker of the company analyzes each segment and judges its performance on the basis of Net Sales, Operating earnings and Gross margin. The revenues, that the firm generates are a product of merchandise sales to its customers and material sales from a single customer are not generated. In the domestic segment, Toys R Us has 800+ stores that are functional in 49 states including United States, Puerto Rico and Guam and through e-commerce. Internationally, the company operates through a chain of 817 operated and 257 licensed stores which are spread across 37 countries and jurisdictions. While handling the company’s plan assets, the investment managers carefully analyze and manage risk that are associated with funded status risk, market risk, interest rate risk, operational risk and liquidity risk. Toys R Us consider cash flow management and diversification of asset class a main segment to be used while devising strategy for the management and an important aspect to devise investment strategy as well.

Over the years Toys R Us has experienced a significant decline in the overall revenues. This was mainly due to the fact that the company wasn’t dynamic enough to change its strategies in the face of changing consumer preferences of the preferred online portals. The company lost its customers as it didn’t change its policies with respect to the major e-commerce revolution. The customer satisfaction metrics were also not taken into consideration by the company. The stores of the company were not maintained properly as dust collected on the floors as the company had decided to cut out on cleaning services. Another vulnerable step taken by the Toys R Us company in order to sustain in the market was that it expelled knowledgeable staff as part of its cost cutting campaigns. The series of steps taken by the company led to an overall reduced level of customer satisfaction which further affected the number of loyal customers in the firm.

The technological factors in the PESTLE Analysis of Toys R Us are mentioned below:

Toys R Us throughout the years has learnt the importance of adapting to rapid technological changes. They have driven massive growth in the e-commerce business, especially within their omni-channel programs. In 2016, the company’s consolidated e-commerce business presented a promising figure of $1,495 million in the form of net sales. The company has launched a variety of stores in order to meet its customers ever changing and growing requirements. Toys R Us have introduced a concept of Buy Online, Pick Up In Store concept where the customers are offered the flexibility of browsing and shopping the products online and then picking up the purchases through stores is less than one hour. They have also developed a concept of Ship From Store where the inventory from across various outlets are shipped to the current outlet in order to fulfill the demands of online orders.

Another concept is Ship To Store where the customers can order unavailable products to the local stores of their choice without incurring any shipping charges.

Following are the legal factors in the Toys R Us PESTLE Analysis:

The company has faced significant legal issues in the past. In 2017, the firm filed for bankruptcy. In the deal it was revealed that the lawyers and liquidation advisers were paid a hefty, fees of $56 million. The firm Kirkland and Ellis law firm represented the case of Toys R Us in the process of bankruptcy. On the day when the company along with its attorney announced the liquidation, they were criticized for the rapid deterioration of the firm. In the end the lenders of the company decided on a mutual basis that Toys R Us operation had to be seized as it was incurring losses. The employees of the firm did not receive severance from the company which reflected clearly how the employees of the firm were neglected during the process of bankruptcy. The entire fiasco reflected negatively on the brand image of the firm that had taken decades to establish.

In the Toys R Us PESTLE Analysis, the environmental elements affecting its business are as below:

Toys R Us is sensitive towards uplifting various communities of the society. They understand the importance of achieving sustainability in operations as well as contributing to the society to create a positive impact. For the past three decades, the company has had a long tradition of supporting a wide range of children’s charities and have contributed more than $100 million in product donations for the same. They have incorporated a separate public charity known as Toys R Us Children’s Fund Inc.

which has donated more than $130 million towards safety and security of children. The company also actively encourages their employees to become active in charitable endeavors by achieving a match between their contributions and the charities that qualify with their choices. Toys R Us has a well-established system through which it focuses upon organizing Volunteer Match, a program that assists them in identifying charities which can be provided with the necessary help.

To conclude, the above Toys R Us PESTLE Analysis highlights the various elements which impact its business performance. This understanding helps to evaluate the criticality of external business factors for any brand.