The political factors in the Air Asia PESTLE Analysis can be explained as follows:

Various political factors affect the operations of Air Asia since the company operates across different countries, on different continents. As a result, apart from general regulations of the aviation sector, the company also needs to follow the local restrictions of the aviation boards that operate in the region. The dynamic nature of the task leads to increased expenditure of research, that needs to be undertaken to stay relevant in the segment as well as abide by the different regulations. The landing charges across countries vary, which changes the operating cost of airlines across the world. This is more or less similar in a particular region but is subject to any changes in the political situation. The political stability in certain regions and the diplomatic relations between different countries, ease the operations of the airlines. Terrorism is a major influencer of airline operations. Air Asia do not operate in remote areas, with major terrorist disturbance, and operate with utmost caution in regions where terrorism is spread across but not that prevalent. A change in policy by the government drastically affects the business of the airlines, and thus it becomes very important to keep a track of all the changes related to the government. 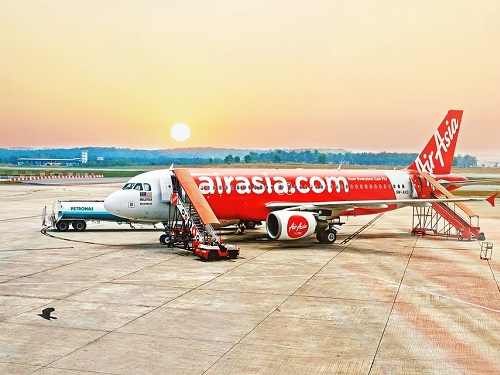 Below are the economic factors in the PESTLE Analysis of Air Asia:

The economic condition of a particular region describes whether or not people can afford flights.

With the flight being considered a luxury mode of transport, a rise in income, with the flight prices getting cheaper will lead to a high demand for flights. When discounts are applied during the festive season, and people prefer taking airways to travel distances and save time. With Air Asia offering cheap tickets and fewer in-flight services, the airlines have managed to produce a low-cost carrier chain for the betterment of all its stakeholders. Another major factor that affects the operation of the airlines, is the fact associated with the cost of fuel. With the trade war between the US and the UAE countries, there have been major fluctuations in the price of the oil. These changes in price are responsible for causing an increase in the operating cost of the airlines. Further, the airlines are affected when the recession hits different markets and countries. With inflation accompanied by low spending by the consumer, causes a slowdown for the airlines, since people avoid unnecessary spending on luxury and focus more on the necessities.

The airlines' emphasis on ‘Safety first’ for all its customers and with this tagline, has created an image of a safe airline for various consumers across the Asia Pacific region. With the rise in the number of travelers to different countries, especially from the Asia Pacific region, the airlines have managed to grow by over 20% year over year in comparison to the other airlines. Air Asia has managed to understand the need of Asian customers and has provided them with a low-cost option with good quality of service being provided. The airlines have managed to create value for the amount their customers pay. To support its customer via quality service, Air Asia has managed to include staff that speaks multiple languages, especially the Asian languages to serve its consumers better. Air Asia, with its target to serve people better, has conversed with various local leaders, before opening new routes and social enterprise initiatives.

The technological factors in the PESTLE Analysis of Air Asia are mentioned below:

Air Asia tries to stay updated with the recent technologies and digital media. The airlines have a strong presence on social media such as Instagram and keep posting the recent updates and discounts that are to be offered by the airlines over the various routes. The company promotes online booking, hotel bookings, car hire, etc. AirAsia runs an online program GO holiday, where guests can book holiday packages online in real-time. The company keeps changing its aircraft to stay updated and relevant in the segment. With recent and most updated technologies, the company has managed to improve fuel efficiency, while providing its consumers with a more luxurious and easier ride. AirAsia has also been working on chargeable in-air Wi-Fi. This will facilitate the consumers by providing them with free Wi-Fi for a fixed amount.

A recent advancement is the company’s announcement of a technology center that will be involved with providing custom digital solutions for the airlines.

Following are the legal factors in the Air Asia PESTLE Analysis:

Since Air Asia operates across various regions, it needs to comply with the different regulations that prevail across these regions. Though the market in the Asia Pacific region has become more liberalized, the regulations for the aviation sector have not. Increase in competition, rise in the cost of fuel, and increased inflation in some countries have all affected the operations of the airlines, and yet to stay in business the airlines need to abide by the different regulations. Since the airline operates across different regions, it also needs to take care of the different laws related to employment in these regions are followed. The staff employed by the airlines directly to operate in different regions needs to be compensated according to the legalities prevailing in those regions. The airline also needs to consider various regulations related to providing quality service to its consumers, since a lapse in these policies will lead to major damage to the brand, along with massive monetary effect.

In the Air Asia PESTLE Analysis, the environmental elements affecting its business are as below:

Air Asia has been working towards making a mark in the field of sustainability. The airlines have tried to reduce the weight of their carriers, to facilitate lower use of fuel and increase efficiency. A recent achievement was when the company managed to reduce its carbon emission by 609 tons in 2017 as compared to emissions in 2016. The per passenger emission of CO2 has reduced to 69.68 grams per person in 2017 as compared to 76.75 grams in 2016. The company has recently started measuring its carbon emissions from electricity usage by various aspects of its operations.

The airlines to save paper has undertaken the initiative of recycling its travel360 magazines and utilizing the money generated from the process towards the Red Heart Fund. It has also undertaken the initiative of recycling the cabin waste that is generated per flight, and this is processed by certified vendors, and the proceeds are utilized by the Red Heart Fund for its social causes. The airlines are trying to do its bit by helping to save the environment, this should be considered an inspiration and should be taken up by all major aviation companies.

To conclude, the above Air Asia PESTLE Analysis highlights the various elements which impact its business performance. This understanding helps to evaluate the criticality of external business factors for any brand.