The political factors in the Marks & Spencer PESTLE Analysis can be explained as follows:

Marks & Spencer has a brand presence which is widespread in various countries. The brand operates 1300+ stores all over the world and has its headquarters in UK. The company has had the benefits of EC’s trade agreements and that further leads to decrease in the sourcing costs. Marks & Spencer can utilize the benefits of the large EU market where its products can travel freely across various countries without restrictions such as tariffs and taxes. Pricing regulations of other countries such as are there any pricing regulatory mechanism for Consumer Services. Marks & Spencer believes that is very important to work closely with the government and interact with them to protect an organization’s legitimate interests. They respond to government queries which is publicly available on their site. The company also bags full support from the government as it has rich historic values and fair means of trade practices. The two main factors affecting the company are political stability and taxes. If government increases taxes then that further increases the price of the products of Marks & Spencer which would have negative implication on the sale of its products. 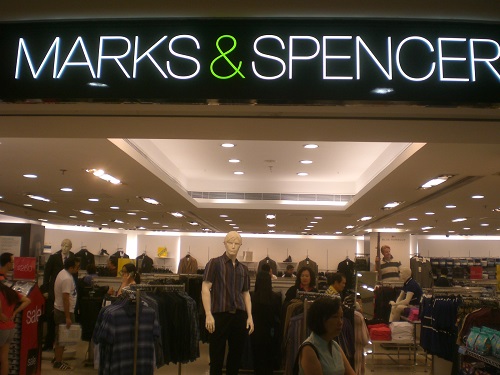 Below are the economic factors in the PESTLE Analysis of Marks & Spencer:

A rise in the inflation rate of a particular economy affects the way the companies operating in that economy price their product or services.

Economic factors include inflation rates, interest rates, foreign exchange rates and economic growth patterns etc. The United Kingdom is one of the largest economies in the world and also is an open economy. Fiscal and monetary policies of UK are properly managed as the government has strong finances and has successfully maintained a low rate of inflation. The company overall has a strategy which is aligned with providing quality products to its customers. Financial crisis, can however lead to decrease in the demand for high quality products for Marks & Spencer because of low disposable income in the hands of the consumers which further reduces their ability to spend on luxury or clothing. Marks & Spencer have been affected by the crisis as the company had to make job cuts of 2% of their staff of 70,000 employees. The recession affected the company’s ability to give discounts as the company scrapped off the initial idea of offering a discount of 20% on Christmas.

In 2006, the Chief Executive of Marks & Spencer Stuart Rose wanted to expand the company’s brand name in order to keep up with the changing trends in the market. Asda and Marks & Spencer appeal to different markets in terms of social class and demographics, this has major implications on how they handle current issues in the market. Consumer purchases are influenced by cultural, social, personal and psychological changes in the market. Over the years, the cheap clothing industry has increasingly caught up with the changing trends in the market and they provide less expensive versions of the clothes in the market. Change from baby boomers into the generation X and millennials requires that firms change strategies to suit the need of the current generation. The clothing line sold and the space given to it basically depends upon the locality and demographic. Some shops in London don’t stock the Classic Collection, rather they go with the limited stock collection and a full Autograph range. There was increase in trade of more than 10% after credit cards came into the market. Marks & Spencer took advantage of this opportunity and allowed its customers to pay through credit cards which further increased its sales.

The technological factors in the PESTLE Analysis of Marks & Spencer are mentioned below:

Marks & Spencer has announced Technology Transformation Programme that would enable the company to become a digital first business and deliver a diversified customer experience. It is designed to create an agile, faster and commercial technology function that would result in growth for the businesses. The company is focused around creation of a new Technology Operating Model, which would significantly help Marks & Spencer in exploiting new technology including the adoption of industry agile methods. The company has focused upon simplification and consolidation of Marks & Spencer technology supplier base.

The company understands about the role of technology in successful operation and its importance in delivering agile, flexible and simpler customers focused products.

Following are the legal factors in the Marks & Spencer PESTLE Analysis:

The legislations in every country are ever-changing. Marks & Spencer continuously conduct training sessions on areas such as health and update them every single year in order to keep themselves updated with the current laws and legislations. The brand came under public scrutiny when it was accused of failing to protect its employees as well as the workers from potential risk of exposure to asbestos. The Marks & Spencer store in Broad Street was getting being renovated at the time when ceiling tiles containing the cancer-causing material fell down to the floor. The company however, failed to address the entire issue and turned a blind eye towards the entire issue. They were eventually convicted of two charges one of whom was based on the Health And Safety at Work Act 1974 in order to take measures for establishing norms towards the safety of the workers. They convicted for both the offences and fined 500,000 pounds for each offence.

In the Marks & Spencer PESTLE Analysis, the environmental elements affecting its business are as below:

The issues related with the current climate conditions, are being promoted on a regular basis on television, in magazines and in newspapers as well. Marks & Spencer have their established their own Green Policy which they now refer to as “Plan A”. It is an initiative adopted by the company to have a positive impact on the wellbeing, communities and on the planet.

They work closely with Better Cotton Initiative (BCI), and has worked closely with them in order to develop practices that would support sustainable practices for procurement and processing for cotton. They have systematically acted as facilitators for bringing about a powerful change where around 75000 employees as well as 2000 suppliers of Marks & Spencer have acted as links for reducing the disparities in the society. They have worked upon a variety of areas such as removing trans fats from the food, reducing the use of energy and promoting fair value of trade.

To conclude, the above Marks & Spencer PESTLE Analysis highlights the various elements which impact its business performance. This understanding helps to evaluate the criticality of external business factors for any brand.