The political factors in the Tide PESTLE Analysis can be explained as follows:

Tide strongly believes that the word of mouth plays a major role for the success of their organization. The company has placed themselves among the top players in the detergent industry. Around 40 million households use Tide detergent across America. With the widespread promotion of tide pod challenge the politicians in America raised their concerns against the packaging of the Tide Pods. They criticized the packaging of the company on the ground that the product looked like a candy and displayed their aversion towards the entire concept of teenagers consuming those poisonous pods. There often have been allegations on the company that whichever country the company enters it brings with it, the American style of consumerism which they try to spread across the globe. In India the company has a tough competition with products of HUL in the detergent segment as the economy wasn’t completely open to outside competitors nor it was investment friendly until the policies changed. 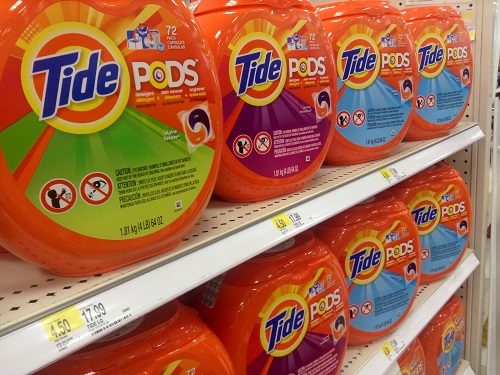 Below are the economic factors in the PESTLE Analysis of Tide:

The detergent market especially in the premium sector is growing at a rapid rate.

The market for liquid detergent is expected to grow at an annual rate of 5%. The market for liquid detergent would become the size of 39.8 billion at the end of 2025. The company can take advantage of fast paced growth in the market for laundry detergent. Although the majority of the market share in the detergent segment is dominated by parent company of tide i.e. Proctor and Gamble, the overall market is highly competitive. At Tide the products are continuously formulated in order to introduce innovation and provide superior packaging for the products. In India, with the reduction in the tax rate of GST for the premium and the middle segment, the gap between the prices of the detergents from the lower segment to the upper two segments has reduced. This has further increased the revenue for the products under these segments. Products such as Tide Plus fall under the category of middle segment.

In the rural areas especially in India, people started facing certain problems with the usage of locally manufactured products. These products are usually high in soda ash content and these products have a very harsh effect on the skin. This has changed the preferences of the consumers in the rural areas who have now switched to middle segment and high segment detergents such as Tide. Another factor that has increased the usage of detergents is that the bars dissolve faster. The consumer prefers a product that lasts for a longer period of time. However, the customers at the top end of the market usually prefer to use detergent over lower quality bars as they believe that bars take a lot of time and manual effort in order to wash clothes efficiently. Detergents like Tide possess a better market share because of the different consumer choices.

The technological factors in the PESTLE Analysis of Tide are mentioned below:

The company believes in innovation through the usage of improved technology. In the past, Procter & Gamble Co. had launched Tide Pods. These pods were small but were highly concentrated liquid detergent tablets. In order to ensure the success of the product they had invested more than $150 million in the marketing campaign of the same. Also, the sale for detergents such as Tide were affected mainly due to the increase in the sales of washing machines. The availability of the funds and massive penetration of the washing machines has forced consumers to switch to middle and higher segment detergents. Sales personnel and technicians inform consumers about the positive effects of using Tide which in turn drive the sales of the products.

Every year the sales for such premium washing machines improve at a certain rate which further lead to increase in premium detergents.

Following are the legal factors in the Tide PESTLE Analysis:

The company has engaged itself in price wars before in order to reduce the competition in the market and establish new customer base. In the year 2009 P&G introduced a new product variant of Tide in order to reduce the sales of Hindustan Unilever’s product variant Wheel. Due to reduced sales HUL, reduced the prices of Wheel further in order to gain back its market position. The company came under the public scrutiny after the Tide Pod Challenge when eight people died after consuming Tide Pods which contained dangerous chemicals. Even overexposure to the chemicals contained in the pods causes irritation on several parts of body. The detergent companies are required to comply with the legal laws and they have been constantly discouraged regarding the use of such chemicals in their products.

In the Tide PESTLE Analysis, the environmental elements affecting its business are as below:

Tide was successful in incorporating sustainable practices and innovation through their disaster relief campaigns such as Tide Loads of Hope campaign. They believe in the fact that everyone deserves to wear clean clothes even in their times of crisis. After Hurricane Katrina, Tide introduced Loads of Hope program. Their main goal was to empower communities which were suffering through the negative effects of natural disasters. They provided clean clothes to such communities in the outlying areas.

They have created a positive impact by providing such families with washed and dry clothes that were provided by them to the aggrieved victims at every visit. The parent company of Tide introduced their Shiksha program through which they provided education to more than 280000 children giving them the basic access to education. Through their program they have built communities that have changed the life of thousands of children and given them an opportunity to transform their lives.

To conclude, the above Tide PESTLE Analysis highlights the various elements which impact its business performance. This understanding helps to evaluate the criticality of external business factors for any brand.