The political factors in the Royal Enfield PESTLE Analysis can be explained as follows:

Royal Enfield motorcycle company has a strong presence across the world. Companies are very prone to the policy decisions of the government. It could bring opportunity to grow or could be very dangerous even to the extent of closure of closure of the company. In the recent ruling, the government has decided to skip BS5 engines altogether and directly move from BS4 engines to BS6 from 2020. BS norms are based on EURO standards and since we are lagging behind, the government has decided to move BS6 directly. Now the problem is BS6 is technological advanced and a lot of money is required to invest in developing the BS6 engines which will increase the cost of the bike and Royal Enfield bike which is already a premium bike will cost more. 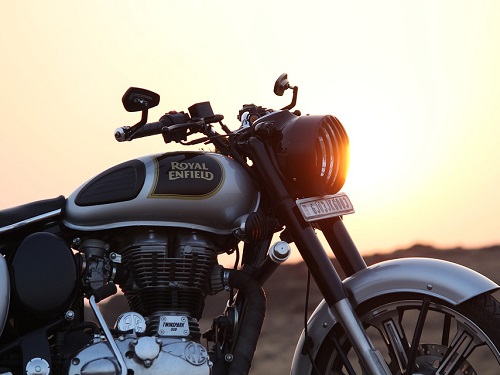 Below are the economic factors in the PESTLE Analysis of Royal Enfield:

Royal Enfield is based in India. The current boom in the economy of the country has provided great opportunity for Enfield to increase its customer base in the country. The economic boom increased the per capita income of Indians rapidly and since the Enfield is in semi premium segment, the increase in middle class income has significantly increased the sale of the company’s bike. The Classic 500 cc bike it launched has become a huge success in the market so much so that one will get the bike 9 months after ordering it. Royal Enfield company is planning to launch its bike in many other countries but before it needs to do thorough research of the economic condition of the countries in which it is planning to launch its bike.

Brand name is something that resonates in the mind of the people for the long time. In India, youth begins to purchase things of that brand which shows high status symbol. That’s where Royal Enfield has established itself in the market. Its brand value is so much so that Booking period is 9 months means people will get the bike 9 months after booking the bike. Royal Enfield has become the status symbol of people. Its heaviness and the heavy sound make it more attractive to the people. The brand has initiated the biking campaign to Ladakh which became so popular that now travelling to Ladakh on bike means travelling on Enfield. This campaign created in people the urge to ride to long distances either alone or with friends on Enfield. It is now launching the Rider mania which is the largest gathering of the Royal Enfield enthusiasts in the world.

The technological factors in the PESTLE Analysis of Royal Enfield are mentioned below:

Royal Enfield spends a lot of money on research and development. It has developed the iconic the thud noise engine for its bikes which became instantly popular among the bikers. It is regularly developing it engine making it more fuel efficient while keeping the noise and feel of the bike intact at the same time. Royal Enfield is very social media active and always connects with its riders and ask their opinions regarding product development and solving their grievance which the riders post online.

Royal Enfield in 2017 opened up its innovation factory in the UK wherein there is test track facility, engine development facility etc.

Following are the legal factors in the Royal Enfield PESTLE Analysis:

It is very important for a company to abide by the rules and regulations set by the government and the judiciary of a country. Royal Enfield many a times come into the lime light and not always for a good reason. Many times, the companies got the complaint of faulty brakes and clutch, blurred engine noise, defect of the magnetic coil etc. and people became very dissatisfied when company does not resolve the problem of the people. Flash electronics, a new Delhi based automobile component manufacturer, has filed a law suit against the Royal Enfield for the patent infringement of a component known as regulator-rectifier.

In the Royal Enfield PESTLE Analysis, the environmental elements affecting its business are as below:

To conclude, the above Royal Enfield PESTLE Analysis highlights the various elements which impact its business performance. This understanding helps to evaluate the criticality of external business factors for any brand.