The political factors in the Pringles PESTLE Analysis can be explained as follows:

Pringles sells its products in around 140 countries which makes it susceptible to a lot of political turbulence. In the past, it has faced problems in the United Kingdom and Australia due to both countries focusing on promoting healthy foods instead of crisps like Pringles. Recently, it has been facing trouble in Italy due to the introduction of a new flavor of chips. The new flavour launched was 'Prosecco', which is a kind of Italian wine whose brand name is protected under Italian law. This led to seizing of these flavored chips from supermarkets by the Italian government. Pringles are now at a risk of getting thousands of boxes of inventory seized. Thus, Pringles has to ensure that it complies with the laws of all the countries it operates in, otherwise it risks hampering its operations. 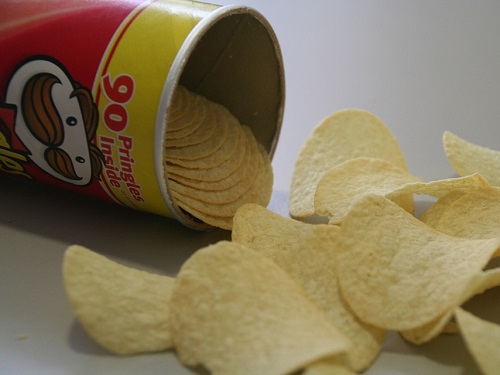 Below are the economic factors in the PESTLE Analysis of Pringles:

Pringles has an immense opportunity on the economic front as the iconic brand has managed to differentiate itself from other chips' brands.

In most of the markets it operates in, it lags behind Frito-Lay in terms of market share which it can target to catch-up. The potato chips industry is expected to grow to a multi-billion industry by 2030, which is a good sign for Pringles. However, the current slowdown in the world economy can spell short-term troubles for the brand. As mentioned in its annual report, the brand faces significant exchange rate risk due to its wide area of operation. Also, the brand has to be wary of the variety of new substitutes available in the market which provide healthier snacks at a lower cost which is a sign of trouble in an health-conscious population.

Pringles along with its parent company, Kelloggs, aspire to align with the 2nd goal of the United Nations Sustainable Development Goal which focuses on ending hunger and improving food security and nutrition. As part of its goal, the company has contributed about 2.5 billion servings of food since 2013. As an effort to connect with its customers, Pringles launches both International and local flavors in different countries. This helps customers relate to the brand while simultaneously getting to appreciate its international range of flavors. It also creates specific marketing campaigns for different countries to integrate its brand better. For example, it recently created a Guinness World Record by stacking its boxes in the form of a model to show support for the Indian cricket team in the ICC cricket world cup.

The technological factors in the PESTLE Analysis of Pringles are mentioned below:

Pringles has always been quick to adapt technology to its benefit. In fact, the name of the brand comes from the co-inventor of the process behind its uniformly sized chips. Technology can help Pringles to market its brand better in the age of social media marketing. It can also harness the use of technology to make itself a healthier snack than it presently is without compromising on the taste it provides. However, as mentioned in its annual report, Kellogs and Pringles are wary of the alternative retail channels like Amazon as their biggest customers have been the traditional retail stores like Wal-Mart. They have to make sure they correctly expand into these alternative channels.

Pringles recently incorporated smart device Alexa in its advertisement to find a better connect with its modern target population.

Following are the legal factors in the Pringles PESTLE Analysis:

Pringles are sold in more than 140 countries and this makes it important for the brand to carefully comply with each country's laws. The recent seizing of Pringles' inventory in Italy due to copyright law is an example of how a simple oversight can lead to high losses for the brand. Even earlier, a UK court had categorized Pringles as potato chips against the company's stand, which had led to an increase in taxes the company had to pay. The company has admitted that it also has to stay vigilant to the environmental and food safety laws, which are constantly evolving and often different in different countries. The company also faces risk of changes in international trade policies like the North American Free Trade Agreement (NAFTA) and the possible legal repercussions of Brexit.

In the Pringles PESTLE Analysis, the environmental elements affecting its business are as below:

Pringles has been often criticised for its iconic packaging which is very hard to recycle and has come to be known as the 'Pringles Factor'. The design, meant to keep the chips fresh and unbroken, is made from a combination of plastic, metal and foil, which makes it a nightmare to recycle properly.

However, the brand has maintained that it keeps on trying to make its product more sustainable. Pringles, along with its parent company, Kelloggs, have announced that they will be reducing water use, energy use, waste produced and greenhouse gas emissions by 15% per metric tonne of food by the year 2020. They have also joined RE100, an industry initiative that aims for achieving 100% use of renewal electricity which will lead to a reduction in the emission of greenhouse gases.

To conclude, the above Pringles PESTLE Analysis highlights the various elements which impact its business performance. This understanding helps to evaluate the criticality of external business factors for any brand.