The political factors in the Airbus PESTLE Analysis can be explained as follows:

Political stability matters for a firm who is in aerospace and defense industry. Political stability provides uniform laws which can govern this sector. Airbus is European company and thus the Brexit which is the latest political news between Europe and Britain gives adverse effect to its business. The import and export charges won’t be uniform now. The currency in which the trade is made will be different for both Britain and EU. There is a sharp increase in global security threats and thus the leadership across the world, in all nations is looking to strengthen its defense as a part of preparation towards the worst. In recent years, even US has been importing defense items outside US itself. The manufacturing plants can be moved to a place where they can be manufactured at cheaper cost but the political scenario doesn’t let the manufacturing unit to get out of EU. Apart from the stability and political moves within EU it is also important to note the political moves and deals that will affect Airbus as a business-like USA exit from Iran Nuclear deal. 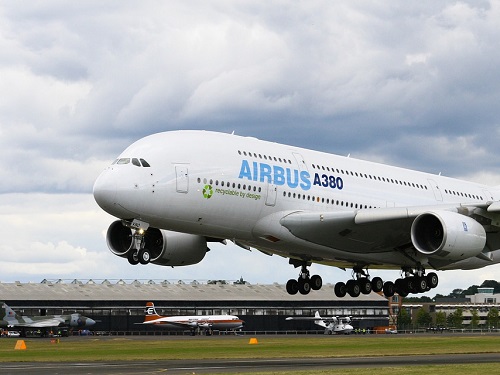 Below are the economic factors in the PESTLE Analysis of Airbus:

The economic factors that impact defense and aerospace company are very different than the rest of the business sectors.

Here the demand of air travel drives business. Since the disposable income is increasing every decade, it is becoming cheaper to rate by air. But in case of economic recession this sector of aerospace gets adversely effected and in a big way. Moreover, the currency rates fluctuation also impacts the rates of tickets and thus the overall demand of this sector. The cost of travel also increases with increased rates of oils around the world.

People feel that air travel is the quickest way to travel or commute. People these days have lot of disposable income at their end. They have very different attitudes: everyone wants to fly by Airbus and its competitor since they are the best in class technologically equipped. They attach the feeling of pride when they travel by Airbus since it is a very respectable brand. The demographics of the country in which it wishes to operates has to be studied. If maximum percentage of population is not able to travel by Airbus considering the cost of the ticket then such routes should not be served as profit reason.

The technological factors in the PESTLE Analysis of Airbus are mentioned below:

Technology is evolving and so is the relevance of the improved technology in this aerospace sector. The role that technology plays is so significant that Airbus invests a huge amount of money in Research and Development of technology. The steel material used is continuously under research. The weight to mass contribution ratio is desired to be lowered so that the efficiency of aerospace increases. The world is moving towards renewable sources of energy and thus the technology which can utilize other forms of energy with better efficiency is to be adopted. There is continuous improvement in the engine efficiency. All the efforts are to make business grow stronger and technology is critical to give Airbus an upper edge over its competitors.

Digitalization of services is also an important technological factor that has helped not only Airbus but all the firms in aerospace sector.

Following are the legal factors in the Airbus PESTLE Analysis:

Legal factors are crucial. The new technology that is developed through investing millions of dollars of currency has to be protected with proper intellectual property rights from its competitors. Also, when Airbus uses someone else’s technology it has to take care of the copyright laws that are set in place. Fright has to deal with export and import laws in respective operating zones. Each law is strictly to be followed to avoid any kind of penalty. There are laws that are agreed by all companies operating in aerospace industry like the one named – ‘Anti-competitive laws’. The material that can be transported in their fright has both internal and exponent influences. Internal as in the safety of co-passengers and external as in the government restriction of transport of specific narcotic and other restricted drugs.

In the Airbus PESTLE Analysis, the environmental elements affecting its business are as below:

Airbus is moving towards sustainable future targets. Replacing fuel with something more innovative and working its way towards renewable sources of energy. Whole aerospace industry contributes in carbon emission.

Airbus has taken sufficient efforts in improving its technology to improve its emission rate and improve overall efficiency of fright. Aerospace contributes to industry’s target of improving 1.5% improvement in fuel efficiency each year between 2009 to 2020. The firm as a whole has its own sustainable target in regards with the body parts it uses to make its aircrafts along with reduction in carbon emissions contributing to global warming.

To conclude, the above Airbus PESTLE Analysis highlights the various elements which impact its business performance. This understanding helps to evaluate the criticality of external business factors for any brand.